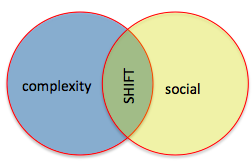 Another cross posting from CMSWire.

So there are these two things going on. The first you’ve definitely heard of – its the great reawakening of the white-collar and consumer world as their value and participation and voice are released from the anonymity of the command and control corporate model thanks to nifty new social technologies. The second is about the exponentially increasing complexity of the world. Everything that touches anything sets off another thing and so on. Social is accelerating complexity and vice versa. The very best of us and even our technology are daunted by the challenge of understanding issues and taking action in such an environment. This is why the future has become ever more unpredictable, and planning ever-more – optimistic.  [There’s a third – and that’s that all this reawakening stuff has nudged us to look hard at some things that had been left unexamined for too long, like leadership, collaboration, and certain exploitative forms of capitalism, but that’s a different discussion]

These two forces are putting intense pressures on business. In his classic work, The Structure of Scientific Revolutions, Kuhn describes a period of “crisis” that precedes a scientific revolution. The crisis is a period where a field of math or science becomes dramatically more complicated, while yielding diminishing, incremental returns. If John Seely-Brown and John Hagel are right, and the average Return on Assets has dropped by 75% since 1965, then we may be seeing an analogous crisis in business that leaves us ripe for business revolution (they call it the Big Shift). Calling it “social” business is missing half of the point. Business isn’t going “social” because it wants to hold hands and sing Kumbaya.

Business is changing to a new model – Enterprise 2.0 – both because people are demanding it AND because a centralized command and control model that uses process and efficiencies of scale to achieve superhuman feats has limits to what it can do. But a new model of applying networks of sensors and capabilities (people) onto complex problems, to achieve uniquely human feats, can solve problems that hierarchies cannot.  [note – i’m officially, if temporarily, moving back to Enterprise 2.0., until such time as someone finally coins a term that is less misleading than “Social”.]

1 Some problems are too hard to solve the old fashioned way.
As a math student (computer science was in the math department back then) I learned that we can classify problems by how hard they are to solve. We measure how much effort a solution takes based on the level of efficiency of the clever little algorithms we use to solve them. In general, these solutions use logic to make hard problems into simpler ones. There is a class of problem, however,  that cannot be solved efficiently because though we understand the problem, we can’t find a clever way to make it look simpler. The technical term for these is NP-Complete. They are very hard.

There is another class of very hard problem – one we see in economics, society and business. These are known as“wicked” problems. Wicked problems have so many factors twisted up together that you can’t really hope to untangle them. Think economics, or the weather. Or product strategy or organizational design. There is no particular right or wrong answers, but there are better and worse outcomes.

Our instincts tell us, based on 400 years of Newtonian rationalism, that if only we work hard enough, with enough intelligence and discipline, we will see the component parts and the relationships between everything and the formula and methodology will be revealed. Everything can be understood by examining its component parts. Nothing is beyond examination or building with swiss-clockworks perfection. Our notion of business and process design (among many other things) depend on this idea, but it is – if not exactly wrong – limited.

The reason strategy is hard, the reason R&D is hard, the reason marketing, support, sales, innovation, operations and design are hard is because they are multifaceted challenges that involve many unpredictable, often external forces that change at an accelerating pace. When you wade into the morass, you are making it even more complex.There is no definitive right or wrong answer, there is only better and worse.

These types of problems are often referred to as “wicked”. Wicked problems defy systematic, top-down solutions. Our Command and Control organizations have done many things well, but we are now entering an era dominated by the kind of problem they don’t do well.

2 But that doesn’t mean we can’t solve them.
We’ve learned some things about solving very hard problems. In the late 1980’s we learned that Genetic Algorithms can solve NP-Complete problems very fast. A subset of these problems were in the field of graph theory. The kinds of problems that deal with optimizing pathways. That could be shipping routes, airline routes, or even communications routing.

As an undergraduate I read about Genetic Algorithms in Scientific American. [I carried a photocopy around in my backpack for my entire senior year, showing it to every professor and other people, who mostly thought I’d started speaking in tongues] What was at that time mind-blowingly cool about these is that you could get a solution to a “very hard” problem, super fast, without knowing anything about the problem itself. No clever algorithm required. I’ll say it again, because its hard to believe. You can optimize these systems and solutions without finding a trick or invention that depend on some new insight or understanding of the problem. You can solve extremely hard problems with no knowledge.

In the mid 90’s I was actually paid to build simulations of complex systems (think SimCity for business) for customers like FedEx, AT&T and certain government agencies. This meant I was messing with “Boids” and the “Bar Problem” and living in Monterey, California – it was a peak experience.

The  Bar Problem is an eye-opener in terms of how you can solve impossible problems with no insight, knowledge or intelligence. It bucks every intellectual instinct you probably have, which is what makes it so interesting. It addresses the question of whether you can solve “impossible” problems of this kind: there’s a bar in Santa Fe (not at all coincidentally the location of the Santa Fe institute that pioneered this work). The bar is a great place to be iif 60% of the population – but no more than 60% of the population shows up on a given night. Otherwise it is either dull or overcrowded. If no one has any information about what the others are doing when they make their decision, how do you get the right number of people in the bar?

Here’s one way. Create a “population” (a set of agents). Everyone follows a random rule. Like “if I liked the outcome 5 days ago, go to the bar”. Or “if today’s date is a multiple of my birthday, stay home”. If the rule doesn’t work more than a few days in a row, change to a new rule. And an answer emerges like an old Polaroid photo. The system finds the answer. If you have any programming skills, this is very easy to simulate (even I have done it, but its a secret – i never want to write code again. It annoys the computer and myself equally).

These kinds of systems are called “complex adaptive systems.” A Complex Adaptive System has a large numbers of components (agents), that interact and adapt or learn.

So – we learn that we can solve (some) impossible problems like – supply and demand, traffic flows, and other insanely hard things – easily.

4. Teams and Crowds – collaboration also solves impossible problems
More recently, we’ve shown that teams and crowds can solve impossible problems. Andrew McAfee has pointed to some stunning proof of this. Like chess. In the old days (1980), a chess Grand Master could blow away any computer at the game. By the mid 90’s, it was the other way around. But more recently, we’ve discovered that a competent team (not masters, but decent players), a process, and a computer assist can consistently blow away the super computer. Or that a random and loosely affiliated group of people can solve the protein-folding problem – a completely “impossible” problem better than any other known method. Protein-folding is hard because a protein is a long string of amino acids. In a body, the long string folds up on itself based on the chemical and electrical properties of its thousands of amino acids. The biological effect of a protein are determined almost entirely by its folded up shape. But its impossible to predict how it will fold, and therefore, what it will do or how it will play with others. In other words, how medicine will or will not affect it.

6. So – when we’re talking about Social Business
You’ve been promised Collective intelligence – but there’s even more. Agents are stupid. People are not (mostly). So – Social Business means we can access collective intelligence – no one is as smart as everyone. At least we’re trying for that. But also, socially connected businesses are complex adaptive systems – able to solve impossible problems – not head on – but through action.

This idea has been implied in several places, but I want to make sure its crystal clear. People are agents. Organizations are complex adaptive systems. Social technologies and philosophies amplify the interaction and connectivity of its agents (people).Of course, the pathetically simple agents described above, can’t hold a candle to the magnificence of a human network. But we need to build our ability to think of human networks as a kind of a complexity calculator. In 2013 we will begin to learn how to wield this “wicked” weapon against complexity.

Emergent outcomes  – the ones promised by social collaboration, social marketing and social in general – are not just a hope and a prayer, but real. Trusting in them is not foolish but wise. Our human networks, thoughtfully connected, with some smart methodologies will help us to apply complexity to complexity and make progress against now-intractable problems.

Enterprise 2.0 is not about social per se, it is about thinking very differently about what is hard. About what is impossible. About what IS possible. About your role in it, and about how a human chorus of intellect can help. Enterprise 2.0 will measure outcomes dispassionately (with equipoise) as a way to ask questions without assigning blame. It will focus on learning as innovation, and disentangle accountability, blame and outcomes. It will depend on the connected circulation of insight and information of a network, often knowledge-less solutions, and the deepest respect for what people can and will bring to the table, given the chance.

Our goal then in this next handful of years is to better understand the relationship between organizations, complex adaptive systems, complexity, and impossible problems. We have hints and clues, some research, instinct, experience and trial and error. Its a hard problem, but its not impossible. We need to break open opaque ideas like “collaboration” and “team” and “serendipity” and get to know them intimately. We need to redefine our ability to sense and create connections and conclusions from luck to faith to something we actually do understand.