[tweetmeme source= “deb_lavoy” only_single=false] Nike again showed its marketing (but not just marketing) genius with this ad developed for the 2012 Olympic games. This ad takes the “if you have a body you are an athlete” tag line and takes it even higher. They remind us that greatness is not the stuff of legends, but within reach of every single one of us. They reinforce this message in a series of ads, one showing a chubby boy, against a dramatic sky, doing his best, finding his greatness. You can’t possibly watch these ads without feeling something.

Now Nike happens to make sporting equipment and clothing that are high quality, trend-setting and pricey-but-within-middle-class-reach. If every person in the world were an athlete, then they get to sell more of their products. So it’s a selfish aim, right? Strictly shareholder value, right?

This just one example of how a corporate purpose can be both very, very profitable, while also creating value and prosperity for its customers. A great corporate purpose or mission statement expresses the value the company is committed to creating for its customers. It creates a magnetic alignment within the company and the market around that value. People within the organization are now rowing in the same direction, orienting their creativity and energy toward a common goal – without sacrificing their intelligence, skills or capabilities for the sake of consistency. Markets (‘people’) get excited and want to be affiliated with the brand. They seek out the products, and are delighted when the products deliver on the mission. They’ll often even be loyal enough to get past some flaws and stick with the brand as it tries to achieve its mission or purpose (i would always use the word “purpose” but I’m concerned about unintended religious overtones, so I’ve been fussing and fiddling with “mission” and “purpose” and would appreciate your thoughts on which is better, or if there is another term that would be more descriptive).

What Nike is also demonstrating, very beautifully, is that they do not just have a purpose (which their website declares to be “To bring inspiration and innovation to every athlete in the world*. (*If you have a body you are an athlete)”), but they have a powerful narrative to go along with it.

In fact, purpose and narrative are strongly linked, but not the same thing. We can cite examples of companies that have powerful narratives, but less clear purpose, and those that have powerful purpose, but unclear narratives. Those in the former category are rare – it is tough to have a strong narrative without a clear purpose. Those that do, are generally companies where the purpose once existed and has been lost, or those that have hired great agencies that build narratives independently from the real company. This is where marketing got its evil, manipulative reputation. But people are more savvy now, and truly good narratives, like truly good ads, aren’t common.

There’s quite a bit of great stuff out there on why purpose matters. It matters to your team – tied with leadership as the key catalyst to employee engagement – now widely considered the key to accelerated corporate performance. It matters to the market – when competition is so fierce and the field so saturated, it turns out to be purpose that people gravitate toward. They want to buy you, not your widget. 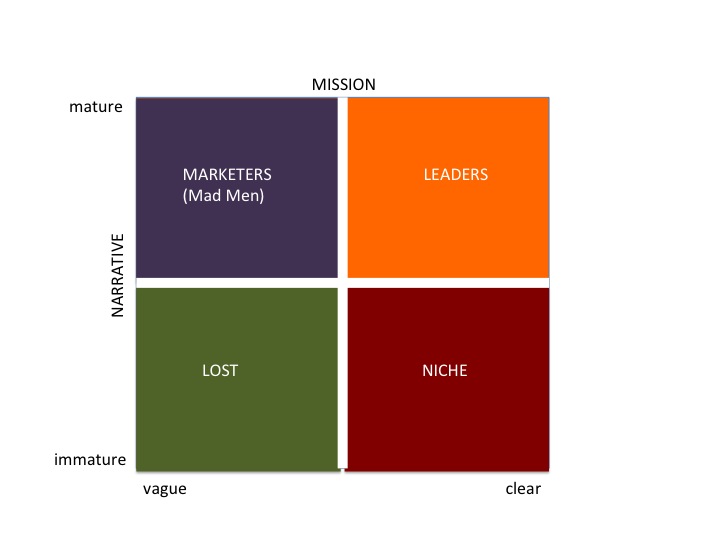 In the enviable top right quadrant, we have the Leaders. You know who these companies are. They are the Nikes, the Apples, the IBMs (IBM is especially interesting as a company who in the last five years or so went from a bottom-left “Lost” to a top-right “Leader”.)
In the top-left, we have the “Marketers” I know several tech companies (that I won’t publicly name) in this quadrant, but I’d also add most junk food companies, several automobile manufacturers, clothing lines, many consumer goods manufacturers, service providers and retailers (Gap).

In the lower left, we have the lost. The lost are primarily hustling to make quarterly numbers. That is their only decision-making criterion. Their marketing is not very effective, their sales cycles are long and unpredictable, their employee engagement is low, their product quality is suffering, and they are generally unpleasant to do business with. Many of these companies once had a clear purpose, if not narrative, at one point, but somehow lost it along the way.  A couple of airlines come to mind, some technology and energy companies. Many are small companies that grew large.

In the lower-right, we have a small, fascinating set of companies. These are companies that have an intrinsic purpose that they are delivering on, but can’t quite articulate. Many highly innovative companies  – especially tech companies – live here. Think about twitter early on – or Reddit – they had some fanatical loyalists, but ask any of them why it was so great, and you got a lot of stuttering. One could say that the entire “social” marketplace still lives here to a large extent. There is one local tech company that I am a big fan of – they have an incredibly powerful approach technology and they are making a lot of money – but only two or three guys in the whole company can sell the product, because they are the only ones who can convey the tacit value of the company and what differentiates them from their competition. Their fans adore them, but they can’t quite cross the chasm because they lack a narrative that connects with a broader market. They recruit their team very, very carefully, and indoctrinate them with a longbreading list and a very strong culture – all good, but very tricky. They see themselves as a small band of brothers (with a few sisters thrown in) who are, in many ways, superior to all they see.

They aren’t necessarily wrong. Such companies tend to have charismatic personalities leading the way, standing in for mission. We are not quite certain as to whether Apple’s mission is clear enough to withstand succession from its charismatic founder to its COO. Check out this recent Apple ad campaign (thanks, Siobhan). I’ll let you judge the merits. An ad, of course, is not a mission, but Apple recently had to reveal its generous marketing budget, (really, we already knew they were spending serious money, didn’t we?) and an expensive ad is generally a company’s best shot at expressing its narrative. 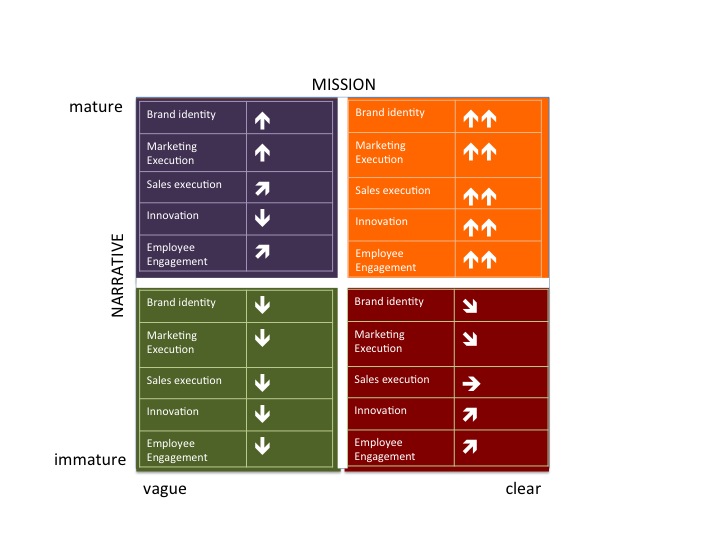