This is a cross-post of a CMSWire article.

Social Business: It is NOT culture. Or technology. Is it Enterprise-Actualization?

“Culture eats technology for lunch” is a clever line that’s been circulating for a couple of years in the social business circuit. I’m not really sure who said it first ( feel free to claim it), but all your favorite people have quoted it. Its meant to mean that social business isn’t a technology problem, but a cultural one. But that is a distraction. Becoming a social business is about neither.

In the 1970s, Abraham Maslow – he of the hierarchy of needs – described a state of self actualization for individuals. Among other things, “self-actualizers” have “an efficient perception of and comfortable relations with reality. They are problem, rather than ego centered, and autonomous – independent of culture and environment.” In other words, they do their own thing, and they know what thing that is. They change and adapt, but according to their own internal compass, more than outside factors. They are evolved. This sounds as though it would also describe the businesses that we hope the social movement is building.

The social business ideal (or idyll) sounds a lot like Masolw’s self-actualized individual. That ineffable something we are looking for in a business, one that is sharp, on its game, consistent, right-thinking, innovative and prosperous – a social business is an evolved business – a self-actualized business. We have a few examples of these. HubSpot is one. Is anyone else tired of hearing Apple mentioned (or can we stop now because they messed up maps)? Zappos, dare I say IBM? Genentech.

A self-actualized organization acts with intention (rather than flailing, or going through rote motions), observes with equanimity (its people remain calm in the face of both good and bad news) and learns at the speed at which it works.

This is very difficult to achieve in a strictly command and control hierarchical, non-networked structure. Information can’t flow fast enough, action cannot be taken fast enough in that kind of organization. So as command and control becomes networked, we have the opportunity to evolve in ways that were extremely difficult before. Networked businesses have strong, narrative leadership, together with a highly connected network of responsible/respected individuals. It is this conscious approach, and fluid, networked, action that produces our current ideal of a social business.

While we’ve made good progress on understanding how to connect and network people in business (which is about both culture and technology), we haven’t done quite as much on the intentional, self-actualized organizational aspect.

I just had dinner with a former co-worker who is now at google, and he described for me a few of their processes around learning, testing, interviewing, etc. It was clear that my very smart friend gets intellectually chewed up and spit out every day – in a state of joy and curiosity. He is stretching himself in concert with the colleagues he openly admires, and its clear its an awesome experience.

It is also clear that Google invests systematically and heavily in learning about itself in every way – technologically, individually, organizationally, and with customers. I’m thinking that they probably describe very well a company that has both its identity and its connectivity nailed.
I also had the opportunity to chat with another organization with a very strong organization with an equally strong sense of identity but a vastly harder one. The Department of Defence. The DoD has several identities – depending on who you ask and in what context – it is the executor of the President’s will, the defender of the homeland and interests, or the creator of peace. All good and valid – and all subject to intense and interesting debate. The debate is a good thing and keeps the identity relevant over the centuries, so lets let it lie. But is it as connected as, say Google? Does it learn as intensely and systematically? Its one thing to put revenue at risk, quite another lives. The DoD is not free to experiment and “canary” (as my old friend put it) each and every idea. That said, it has a more urgent need to maximize learning from each and every opportunity, and its clear that they too take that very, very seriously. By networking itself more fully, it is likely to hasten that process.

I was on a panel this past week with the social media director at Genentech. The way he tells it, their employees are there to cure cancer, as a team. Learning, communicating and sharing pictures of the space shuttle flyover are all part of it. They use their connectivity and their connectivity tools to push forward their agenda. I had a feeling that the Google guy and the Genentech guy would have felt right at home in one anothers workplaces.

The Path
So – what does it mean for organizations be self actualized, and how do the get on that path?
Maslow described 8 activities that lead to individual self-actualization. Here’s a list of them reinterpreted for organizations rather than individuals:

But self-actualization at an organizational level also requires the employees to be a highly connected team, and to recognize its customers, partners and market as the ecosystem it exists to enrich and improve. And in fact, like with individuals, self-actualization is a direction, not a destination – its a matter of degree. No one (well very few) are fully self-actualized, everyone is on a different place in the continuum, and you can choose to intentionally pursue self-actualization or ignore it and hope for the best. 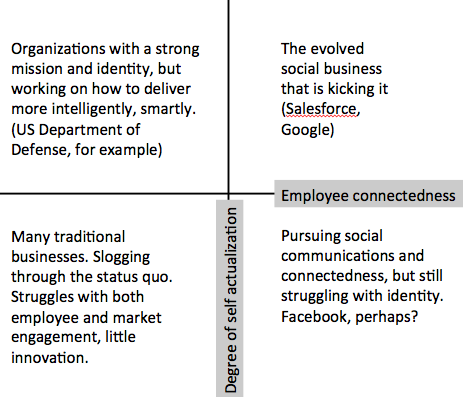 So maybe we need to change the question. Is it “social” we are pursuing? Is Verve the answer? Or is it just a piece of a larger whole? Is “social business” the goal or are we looking at a more fundamental redefinition of business altogether?