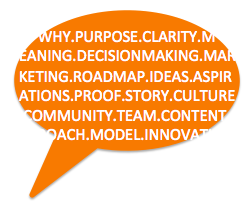 Great brands have narratives. A narrative that explains their aspiration, their approach, and how they go in the world. Sugru is a kind of silicone putty/adhesive. It comes in colors. Its the kind of thing you might find as one of a thousand products on a shelf at Home Depot. But instead, Sugru has a narrative that makes this putty important. It makes you proud to be an owner of putty. IBM’s “Smarter Planet” narrative makes boring, complex technology important. [If it were even better it would make it both important and clear.]

Content marketing isn’t about content, it’s about being deeply valuable and meaningful. It is about standing for something that people care about. In fact, narrative is not a marketing tool. Its a business foundation. Marketing often leads the articulation of narrative, but its essential for the entire team – especially R&D and other people that determine what you sell and how you develop it and sell it. In Zappos’ case its narrative (Happiness) is essential for its core competency – customer service.  In addition to making you meaningful and important to your market, narrative is a framework for thinking about the problem – whatever problem that might be. The team is now thinking about how to make it ever more true.

There is extensive work out there on storytelling and narrative. A few years ago Simon Sinek nailed the importance, if not the method of it with “Start With Why”.  Simon was talking about the fact that people do not care what you do, but rather why you do it. If you’re the last person on the internet not to have seen his TED talk, do yourself an 18 minute favor. Narrative serves to engage your audience, ignite the imaginations of your staff, and act as a gut check on decisionmaking.

So – a story is great if you have one. [n.b. – yes, there’s a diff between story and narrative, but that’s the advanced class] But what to do if you don’t? You can build one. It is very hard and takes certain skills and acts of faith and business that are not everyday stuff. But, narrative, when done well, is the tale that can actually wag the dog. You know your narrative is working when it is easily adopted by your organization. When it is so good its obvious. When anyone can understand it to the point that it feels perfectly natural to tell it in their own words. Your narrative is doing its job when it becomes a core part of the conversation at work – when it becomes an identity. It infuses and defines your culture. It is helping to build the substance of your business. It is organic and viral. If this isn’t happening then you aren’t done yet. If this isn’t happening inside your company, its not going to happen outside with your customers. Great marketing is a side effect of great narrative. Don’t excuse yourself by saying that this is only for consumer goods, twenty-somethings or Apple. Get to work.

If you’re building a narrative, you will be in one of these situations:

If you are starting up, then you are already in the deep soul-searching process of “why”.  Some startups have this fully formed because it was the discovery of their narrative that built the team and drives the founder.  Many have it, but its still vague. The challenge here is to find a mooring. Like Hemmingway, you need to search for the most true thing you can say about your organization, your work or yourselves and find a way to express that to the world. This type of deep truth is almost universally recognizable in the way great art is. Even the unsophisticated know it when they see it.

You are doing business. You are growing. Perhaps you are doing something brilliant, but its really, really hard to explain. You have only 2 or 3 executives who can make the sale, because no one else can tell the story. And it takes them a face to face with every decision-maker. Its nearly impossible to show that you are different from your competition, even though the difference is vast. You are unarticulated. Your exercise is much like number 1, but you have a mooring – your work and your success. Ask your customers to help you. They probably can’t articulate it either, but they know.

Include them in your narrative attempts and spend time considering their input. Gut check your work with representatives of your entire ecosystem – Sales, Marketing, R&D, customers, analysts and experts, and anyone else who may have a stake. Take their feedback very seriously – but not necessarily literally. Steep in it.

So – you’ve grown. Once you had a clear, but probably unarticulated mission. Now you are rudderless. Decision-making in your organization is painful and often temporary. Everyone is working hard, but little seems to come from it. You are in the fog. Now you have to do all of the above, plus.

You are not starting from scratch. There are things that can’t or shouldn’t be ignored. Which creates two challenges. First – you need to discern between the artifacts that need to go and the ones that need to stay. And second, you must at all costs avoid the temptation to post-rationalize

[There’s a fourth,”the pivot” …Pivot is a hard reexamination. Finding the pivot point, means figuring out what your real substance is and framing it properly. I could go on and on, but i’ve promised myself a short, readable post.]

My daughter has a game with about a dozen dice with words on them instead of numbers. You roll them and  make a story out of the awkward set of words that fall. Too many organizations build narratives the same way. They have a series of existing concepts, constraints and phrases – maybe they’ve been in use for years. Maybe they are pets of executives, analysts or customers. The stories my daughter and I come up with are about as cohesive and useful as your post-rationalized narrative. They both stink, but at least my daughter and I get a laugh.

Your narrative has to tell a truth, and truth is not a negotiated list of words whose goal is to thread the needle of your various weird pursuits and constraints.

While you may have rationalized that story and convinced yourself its true, no one else will get it or believe it. You might hook them for a moment, but when you turn around – its gone. They bought your enthusiasm, but not your story. (@krcraft puts it – the pitch, the promise, but not the purpose) [This is often true with personality lead companies where only a few people can make the pitch – its a symptom of poorly or unarticulated narrative. When your customer turns to convince others why they should buy your stuff – turns out they have no words. (cough, cough, Palantir).]

Post-rationalized messaging feels complicated and strange. You know you have it when people have to refer to their notes to remember it. When you have strange sentences that look like they could almost be in English but must be painfully memorized.

The cure isn’t easy. You need to look for a big truth – a truth that is big enough to contain all those important artifacts you are trying to deal with.

You can’t string the old ideas together – you need to create a context in which they all (or not) naturally fit. You aren’t forcing random puzzle pieces together with glue – you are drawing the rest of the picture into which they naturally fit. You are writing a novel, in which (at least some of) your dice-words fit as part of a plot and texture. You need to force your thinking upward and out. For this golden moment at least, you are a poet, a philosopher, an inventor, a maker.

Of course truth-seeking is the endless pursuit that encompasses most of human history excepting war and business. But this is little-t truth, and it will be playing an ever more important role in “Social” Businesses.

Experience has shown me that truth (if not Truth) can be found intentionally rather than fortuitously. You need a framework to help you structure the anatomy of the narrative (I call mine the narrative hierarchy – but that’s another discussion). You must be willing to discard good ideas at a sometimes terrifying rate. You need some close brain-trust relationships. Narrative building is collaborative, but not a consensus process. (yet another discussion) In other words, building great narrative, like innovation, is a result of skill and effort, not luck.